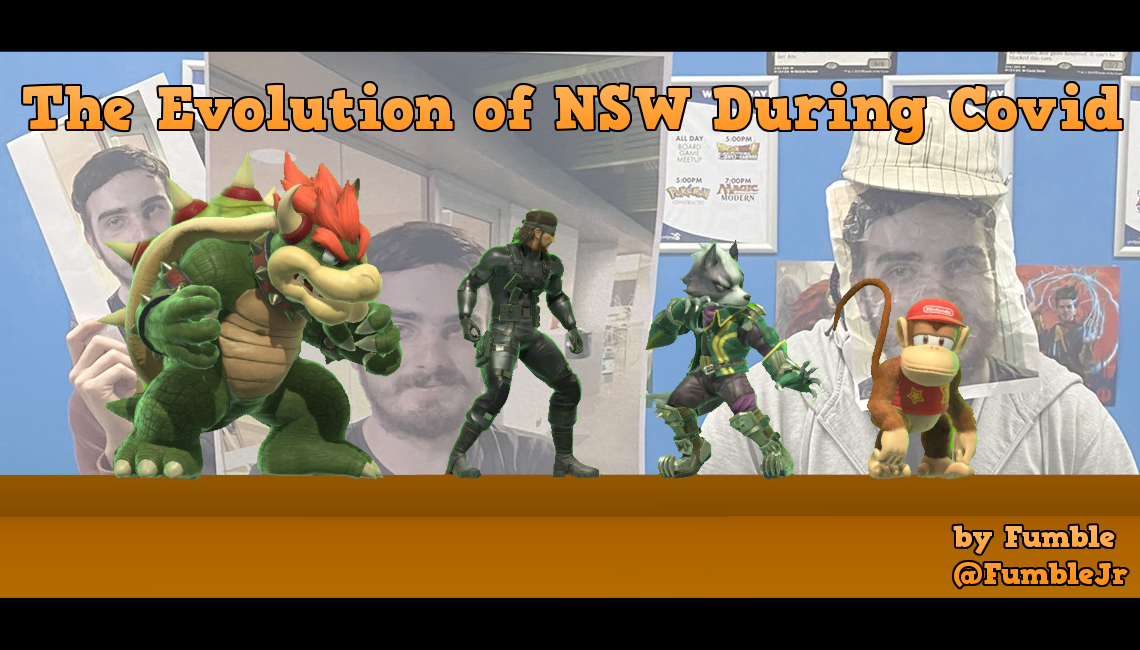 Phantom 2020 solidified a shift in the NSW scene, our top level was on the way out.
We knew this was coming. Killy and Luco were already inactive. Other top players like Emansaur, Joe and AT LOWES were expressing waning interest in competitive Smash. The top ranked and most driven player in our scene, Purple~H, was a temporary blessing who was going home to Germany sooner or later.
The next contender for #1 was banned soon after Phantom.

There was a void growing in the top ranks and instead of seeing players rise to fill the gaps, we had a year of quarantine that came with even more bad news.
High level players like Ryzuul and Glace moved out of state while Matter retired from regular competition.
Our top level had vanished and our high level was shrinking.
With a year of no events it was difficult to imagine how NSW could recover as a state with multiple threats at major tournaments.

But on February 8th, the first Sydney Smash tournament since quarantine brought with it a glimmer of hope:
Chaos.

Central Sydney Skirmish 1 saw breakout performances from players like Dmo, a Joker player largely regarded as a wifi warrior who upset Emansaur in WR2 and got 5th at the event.
Halosydne, an Ice Climbers player who previously had few results lost to Enn in WR1 then tore through losers, beating players like F1ERCE, Mukora and Beet to claim 7th place.
Enn, an ex-PR player who had been inactive for some time beat maGs and knocked Emansaur out at 9th, double eliminated Halosydne, before winning 3-2 over Day in Losers Semis and losing 2-3 to Ryan for 3rd.
Another noteworthy result is 7th from Kanga, scoring his first top 8 at a Sydney Smash event, winning over players like maGs and Fez.
Grand Finals saw Twirly and Ryan, two players previously on the lower end of our PR fighting for first.

And as impressive as those results are, they don’t even scratch the surface of the state of the NSW scene.
CSS is a small event with a 32 player cap that largely attracts players on the upper end of our skill range. As the following weeks went by, it became clear that competition was volatile. No two brackets were the same.
Every CSS saw new contenders like Shaoweater, maGs, chizzL, F1ERCE, Isak, Olag, Dugongs, Johto, Mukora, Day, Trojans, jT, Guts and even AT LOWES who were able to strike within top 8, often multiple times. There were some consistent top results from players like Beet, Shmu, Emansaur, Ryan, Twirly, Enn and Dmo. Chipotle and Fez also managed to snag entire tournament wins on good days.
And those are just the highlights.

Return of the Star Forge

Star Forge briefly returned for 3 events that only contributed to the chaos.
SF 112 especially had some very unexpected performances.
Kanga bulldozed through his winners bracket, causing upset after upset from WR3 where he beat Beet, Shmu, Killy and Ryan back to back to make it into Winners side Grands.
F1ERCE lost to Killy in WR3 and tore through his losers bracket and eliminated Guts, Scarpian, Fez and Dmo before getting the run back on Killy, then losing to SteveGuy86 in Losers Semis.
SteveGuy86, the biggest wildcard of the event beat Day and Fez in Winners before falling to Ryan in Winners Semis, eliminated Shmu and F1ERCE before DQing in Losers Finals.
Ultimately, it was Ryan taking the event over Kanga to produce the strangest top 4 a Star Forge has ever seen with Ryan, Kanga, SteveGuy86 and F1ERCE outplacing numerous top and high level players from pre-quarantine, as well as some rising stars from CSS like Enn and Dmo.

There’s too many notable sets from SF 113* and 114 to really highlight everything, but some key upsets include SteveGuy86 beating ACT’s Kinaji, Halosydne and jT taking sets over Shmu, Kanga beating Glace, Fruit beating both Kanga and Dmo, and SteveGuy86 resetting and defeating Ryan to win Star Forge 114.

*SF 113 was unfortunately cancelled before top 8, which was lining up to be just as wild as we’d come to expect.

AEL’s Georges River Cup saw Isak clutching sets over Violet, Xav, Ryan and Twirly to place 5th. Vic interstater SebPro101 had very close game 3 sets with maGs and Twirly, though Seb did win the event Shmu took a set to reset Grands. AEL also had the return of AT LOWES, who placed 5th after losses to SebPro101 and Chipotle. There was another key upset with Dugongs taking a set over Beet to make top 8.

At the first BKB tournament maGs and Rog made incredible runs with both of them placing 5th ahead of top contenders like Ryan, Fez and Shmu. Rog’s run benefited from an early upset, where Olag beat Chipotle in pools and Rog powered through to make top 8 winners side with wins over Olag and maGs. While maGs upset Twirly in her pool, after her loss to Rog she beat Fez and Shmu before being eliminated by SteveGuy86.

Even more players proved themselves at the second BKB event with two unexpected top 8 placings by Plump and MrDuck. Plump went on a tear in winners, taking sets over Violet, Bjschoey and Rog. While MrDuck beat F1ERCE in winners, lost to Ryan then eliminated Violet and Kanga to make top 8. Bjschoey went on an incredible losers run after losing to Plump, beating F1ERCE, Dugongs, Ryan, getting the runback on Plump then knocking out Day with a ridiculous last stock comeback game 4 in Losers Semis. He could only be stopped in a close game 5 set with Twirly in Losers Finals.
Grands had another nailbiter game 5 set with SteveGuy86 clutching it before Twirly could reset.

The impact of chaos

At every event since tournaments have returned to NSW, different players popped off. While there have been some consistent performers, they’ve also lost to players below them.
NSW brackets have been really volatile and no event better demonstrates that than CSS 14 on the 24th of May, which saw upsets in 6 out of 8 WR2 sets. For a time I believed that we’d see more coherent stratification of players but the more events we have, the less certain I am of that.
It’s really exciting to have such a muddied range of high performers, all of which are continuing to improve as the competition grows more and more wild.

I truly believe this is the healthiest phase of competition we have ever seen in NSW since Ultimate released.
Everyone is so driven to outplace others around them, there’s no doom and gloom. No certainty that any player will lose to anyone else. The upper range of our scene is hardly stratified, it’s a smear of players who could upset anyone on any day.
Competition is thriving and the scene is levelling up as a whole because of it.
While this post focuses on our high performers, rest assured the same thing can be observed at our mid level too.

Of the top 10 players on the Ryan 35, 9 of them have won a CSS or Star Forge bracket since tournaments resumed.
And just under that is a broad range of players all capable of strong results. Ryan put it best by saying “Everyone ranked 11-25 are quite close in skill. I feel like on their day anyone in that range is able to challenge for top 8 at a weekly.”

And though this volatility may be seen as a weakness due to a lack of consistency, we can examine the results of our players in other scenes to try understand how well we compare. Recently we have seen a few NSW players travel out of state where they had strong performances.

Dmo (#11 on Ryan35) is still in Vic, where he’s seen results like 5th at Pixel Smash, 9th place finishes at the May Ranbat, EBS and Sunshine Smash. His most notable wins are Ben Gold and RaZe at the Ranbat but he’s also beaten Ryzuul and EL.

maGs (#13 on Ryan35) had some strong results during her stay in Vic, seeing 2 9ths and a 7th place at EBS events, another 9th at the April Ranbat and 3 top 8s at Sunshine Smash events. She got wins on top 40 players like Khami, P9, Saikou, w00tkins, Xav, Slash and came close in a game 5 set against THE GWIF.

Chipotle (#7 on Ryan35) managed to get 7th at Pissmas in QLD, though he placed 17th at Super Sunshine Smash in Vic. On his Pissmas run he beat Joz., Spammage and ClassicJono.

Day (#8 on Ryan35) went to ACT and won The SAUCE 21 and Popoff Village 65 undefeated with wins over Joey, Chat, Maplemage (x2) and Sriks.

Through these recent out of state performances, I believe it’s clear that NSW hasn’t fallen off as much as it initially seems. NSW players are still capable of challenging major threats from other states post-quarantine and we’re yet to even see how our top 5 size up against other regions.

There is precedent for success with our players and I firmly believe we’ll see top level results again.

So where does that leave us?

Sydney is often regarded as an unmotivated region but in 2021 that couldn’t be further from the truth.
We’re on the rise as we work to re-establish our top level.
Though less active than before, Emansaur’s results prove he is still a top level contender within NSW when he does enter. And while it’s uncertain if these players will enter major competition again Matter, Trojans, Leak, Killy and AT LOWES have all re-emerged as players able to find strong results.

But the new era of NSW is capable of more.
New tournaments like Okay This is Epping and Central Sydney Skirmish have breathed new life into our scene.
We have wildcards like SteveGuy86, Fruit and jT who can perform unexpectedly well.
Players like Beet, Dugongs, F1ERCE, Halosydne, Guts and Kanga who improved significantly over covid.
Newcomers like maGs and Dmo that have already made waves.
High level players from pre-covid like Shmu, Twirly, Ryan, Chipotle, Day, Bjschoey and Fez who are pushing new heights.
And so much more.

Though it may seem like we’re a far cry from our potential in 2019 where multiple NSW players regularly placed top 8 at majors and it’s unclear just how well NSW will perform on a national level in 2021, it would be a huge mistake to sleep on us.

NSW lost its biggest names but there’s a whole mess of us vying for recognition at the nation’s top level and our competition has never been more fierce.
So we’ll be back soon.
Count on it.