Rules:
1. Unless your role specifically states otherwise, no communication about the game takes place outside of this thread. This includes both players and non-players.
- This applies to Discord, shoutouts, Twitter, real life, etc. It is not fair for you to receive information (even basic things like player reactions) that other players don't have.
2. No quoting or partial quoting mod PMs, or faking a quoted mod PM in this thread (including screenshots).
You MAY state your role / alignment
You MAY PARAPHRASE your abilities, copy-paste from role PM is not allowed
You MAY NOT try to force others about the specifics of their mod PMs
3. Editing posts is not allowed. Double-post if need be.
4. Make your votes clear and easy to see. VOTE: Boozer is good.
You may change your vote, vote for no lynch and unvote as needed.
5. Lynching occurs once a majority has been reached.
6. If no majority has been reached upon the deadline, no lynch takes place.
7. Thread will be locked during the night phase until the next day phase.
8. Dead players cannot post in this thread. If a dead player had a role that let them communicate privately, they are to cease doing that.
9. Character claiming is allowed.

We've provided our scum with some safeclaims so don't expect it to be a breaking strategy.

85+ tourneys
Well, that was a short but enjoyable game.

INVITATION TO THE MAFIA CHAMPIONSHIP (SEASON 5)

It is with great pleasure that I hereby invite your community to take part in Season 5 of the Mafia Championship.

The Mafia Championship is an annual forum tournament series that pits representatives from various online Mafia (aka Werewolf) communities against one another as they compete to determine the Internet’s greatest forum Mafia player. Each participating community democratically elects one person to represent them and be their “Champion”.

The whole thing started back in 2013, and since then more than 225 different communities and 50+ different nationalities have been represented.

As some of you may recall, Maribro repped you guys last year.

1. DO YOU ACCEPT THE INVITE?

If you agree to participate, the deadline for selecting your representative is May 1. If this is too soon for you to decide on anyone, let me know and we can work something out.

Important notes
- You may decide yourselves how you want to elect your representative, but we highly recommend some sort of democratic process (public nominations followed by a poll usually works out well).
- In addition to electing a representative, you should also name an alternate who will be asked to step in if the first choice needs to back out.
- Your representative should be prepared for having to read upwards of 500 posts per 24 hours during the early stages of the game. Additionally, there’s a requirement that each player must make at least 10 posts per Game Day. Only active players should apply/participate. I repeat: Your chosen player needs to be able to promise a good amount of activity on a daily basis.

The tournament structure
- 170 communities will participate, each sending one representative.
- 10 Qualifying Games will be played, consisting of 17 players each. I.e. every representative plays in one Qualifying Game. The players themselves vote post-game to determine who is deserving of advancement. 1st place will advance directly to the Finale Game (i.e. 10 of the 17 finalists are found this way), while the 2nd places will advance directly to one of the two Wildcard Games.
- A Jury consisting of finalists from Season 4 will discuss and vote to determine 25 players in total deserving of a second chance: 1 will advance directly to the finale, and the 24 other players will play in 2 Wildcard Games along with the 2nd places that advanced directly to these. From each game, three players will directly advance to the Finale Game based on a post-game player vote.
- The Finale Game is played. Once it has completed, the players vote to determine who shall receive the title of Season 5 Champion and a winner’s certificate signed by Dmitry Davidoff, the creator of mafia.

The setup explained very briefly (more details on host site)
This (view picture below) is a semi-open grid setup meant for 17 players: 4 mafia versus 13 townies. First you randomly select a number to decide the mafia team's composition of Power Roles (1-2), then you randomly select a letter to decide the town's composition of Power Roles (A-E). Fill in the number of Vanilla Townies needed to make the town team have 13 members total, and you have your setup. 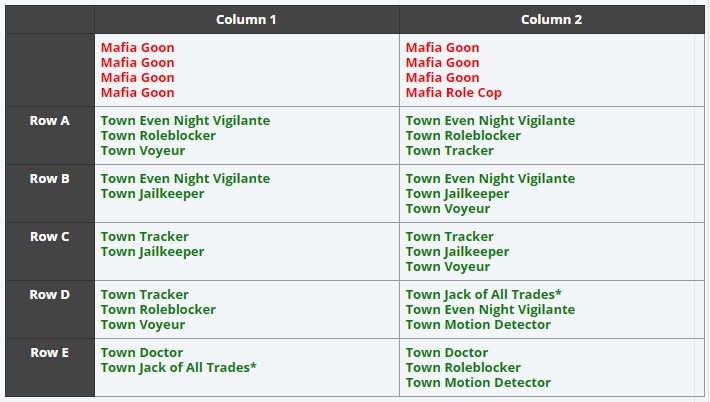 There will be 10 Qualifying Games, and your representative plays in just one of these. They will have start dates during the months of May and June. So in other words, as long as your representative can play sometime during that period, they should be good and I’ll make sure they get scheduled into a game that suits their schedule well. I.e. if your rep is busy until June, that isn’t a problem.

Wildcard games will be played in July, and the Finale Game sometime in August/September (whenever we can work out something that suits everyone).

If you want to get in contact with me ASAP, you can find me on Discord (Thingyman#6075).